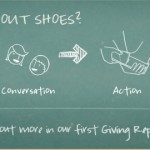 In my head I had justified not going without shoes that day. I was in Mexico and at the YWAM location that I was at there were lots of rocks, dirt, glass and other things laying around that could potentially hurt my feet. If I were on the beach, or in the middle of some freshly mowed field of grass I would do it, but seriously, I could get hurt out here. Then it hit me, I suck.

You see that was the point. Here are the issues:

– millions of children go without shoes each day and are at risk of infection, cuts and disease that enter through the feet.

It is such a simple thing. Kids need shoes. Not just kids, but all people. In a country that is living in extreme poverty (2.7 billion live on less than $2 a day) the last thing they are going to do is spend their money on shoes. They are going to spend it on food instead, to feed their families. The thing is that if the provider who is working gets sick because of disease transmitted through their feet then they cant work either. Then the son of daughter needs to go to work to provide and as result they have to opt out of school. It is a trickle of disaster that is inevitably going to happen. This is a big deal.

Toms, a for profit organization aims to change this. They have a one for one model. If you purchase one of their pairs of shoes they will donate one pair to a person in need. They don’t just do this by dropping millions of shoes from the sky in a small village, that would lead to a whole new strand of problems Im assuming, but they do it by running shoe drives to impoverished communities. The shoes are weird looking, they are expensive and they cause people to look, but they tell a story and the story you get to tell is that as a result of you buying a pair of Toms shoes another child in another country, or even your home country gets a pair as well. That is a beautiful thing.

So today, wherever you are I encourage you to kick of your shoes and tell the story of millions who don’t have any. It is a real practical challenge and an easy way to make a difference, not only in your life but in the lives of other. Take steps of doing justice, today could be your next step.