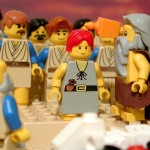 “When Samuel saw David he was ruddy, with a fine appearance and handsome in features. Then the LORD said ‘rise and anoint him; for he is the one.’ So, Samuel took the horn of oil and anointed him in the presence of him brothers, and from that day on the Spirit of the Lord came upon David in power.” 1 Samuel 16:12-13, in the Bible).

This is the story of God sending the old testament prophet Samuel to anoint David to be king over his people. David was a shepherd boy who was dismissed by his father as without worth. The story goes on to show that Samuel looked at all of David’s brothers and the Lord said ‘no’ to them all. Then Samuel asked Davids father “are their any more brothers?” It was then that David was called and was anointed King over Israel.

What did David do in order to be anointed King and for the Spirit of the Lord to come upon him in power? Well, he was just faithful with what he had and with what he knew. He loved and followed the Lord and he did his job as a shepherd. So, what in this deserves the honor of having God’s power come on him? All of it. What has God called us to? To love the Lord your God and to love your neighbor. Pretty simple, but many of us miss this.

Now what does this have to do with Steps Of Justice? Everything. If you are calling yourself a follower of Jesus then what does it look like to walk out the second requirement of being a Jesus follower? Well, to love your neighbor. Who is your neighbor? The orphan and widow (James 1:27), the poor (Psalm 140:12), and those who have had their voice taken from them. How do we do this? Well, when you grow close to the heart of the Father you understand and see what His heart beats for. Then, as you walk out the Steps Of Obedience that the Father puts in front of you, weather that is being a faithful sheep herder, a mom raising kids, or someone fighting for the needs of the oppressed God’s Spirit will come upon you with power.

This week as you draw close to the heart of Jesus ask him what it looks like to love your neighbor. Then, in obedience to what his says or shows you, take a step. When we are all walking in step with Him change happens. Simple steps of obedience lead to massive change and a life filled with purpose and adventure. That is how the Steps Of Justice adventure began, with small, simple steps of obedience as a result of drawing near to the Father. Read here.