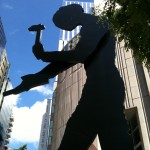 Last week Steps of Justice hosted a 7 day urban outreach to Seattle, WA. Our good friend Lars Roodbrought 33 people from Dallas TX for the week. The week that we spent in the city was life changing for many members of the team. We started off the week doing a justice picture prayer race around the city. The students had 6 locations that they had to find in the city. The topics and hints were all around injustice issues, like water, poverty, education, hunger and government. An example of this is education. We talked about how out of the worlds 130 million out of school youth 70 million are girls. Then with the clue came a picture of the library. They had to find the library and pray for areas of education, it was an amazing time.

The rest of the week was spent learning about the city of Seattle. We learned about the things that are difficult in the city like homelessness, mental illness and the long harsh winters. We also learned about the things that are beautiful, like the people, culture, food, microbrew’s and coffee. We spent time serving at the boy’s and girls club of America, the UGM mens shelter and Hope Place, a shelter for women and children. While at these locations the students learned about homelessness, drug addiction, abuse and poverty. They also learned that they can make a small yet meaningful difference in peoples lives just through smiling at them and treating them like children of God. 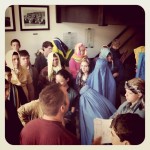 Another organization we partnered with is World Relief. World Relief works with refugees coming into Seattle. They house them, help them get sorted and adjusted to life in N. America, get them jobs and also help enroll their kids into school. World Relief ran the students through a refugee simulation program, where the students were refugees and had to go through a series of interviews to get into the USA. It was super intense, yet very informative and fun. Then we sat with the staff and heard stories about refugees, statistics on them and even had some time talking with one of the African refugees World Relief sponsores.

Thanks for all your prayers and support in what we are doing as Steps of Justice.