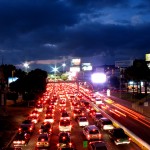 I have a routine, it involves crossing the border into Mexico for work 3 times a week. It usually takes me 30 minutes to get to work and about 45 to get home, longer because of the border line going into the USA. I love my drive from Mexico to the USA, in spite of my sometimes long waits at the border.

You see lots of things in the border line. You see all sorts of people doing all sorts of things. There are the classic people selling chicklets, others selling tacos or churros, people collecting money for charities, and others just begging for money, old and young. You can also buy anything you want in the border line. From a monkey on a surf board to a cute baby puppy they have it there for you. You can also buy sex.

Tonight when I was crossing at 8:50pm I saw just that, a man trying to sell a girl to a truck that was in line. It may not have been noticeable to someone who was crossing for the first or even 10th time, but it stood out to me. The reason that it stood out is that there was a girl, no older than 16 I would bet, standing at the car beside me. The windows were down and she was just walking beside it. The reason she stood out to me was that she wasn’t selling anything, so why was she at the car. Then I looked to see where the guy was, and sure enough he was at the other side of the car talking to the driver. I knew right away what was going on.

My lane was faster than the one beside me so I slowly had to drive away. I turned to a few other guys where were selling stuff on the side of the road and heard them talking about the girl, and basically saying that someone was going to get lucky tonight. Well, I though in my head, it sure as hell isn’t that poor girl. Then my lane cleared and I had to drive on.

This is the second time that this has happened to me waiting in the border. The first time was in September, and during the day. The thoughts that were going through my head and still are going through my head are of sadness. I picture this girl walking along the car trying to look interested, but inside begging and screaming to get away. I imagine her praying that this truck would say no, that she wouldn’t have to go and be raped once again, or for the first time.

I thought about what I should do. Should I stop, should I say something, should I call for the police? Yet all I did was drive on like a confused, frustrated coward. When I got to the border I talked to immigration about it and asked who patrols that area, they said it was the Mexican police, yet they were no where to be seen. I don’t blame them, they have thousands of others to look for in the same line at that very time.

I am sitting here now wondering what else should have happened. What else could I have done, could the border guards have done? Where is the girl now? Will she sleep at home tonight? Does she have a home? Is she Mexican or was she trafficked in from another country? Does she go to school? How long has she been a sex slave? Does she cuddle up to a stuffed animal at night for comfort, or do men cuddle up to her for their own perverted satisfaction? There is this feeling of emptiness, desperation of wanting to go find her and just plain hurt.