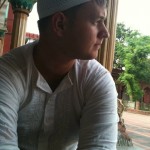 The biggest question in my mind is this:  Is it possible to visit a place like Northern India and live for any other cause apart from the amendatory action of loving it’s people?

My mind has never imagined so many humans.  I’ve never considered what a city of nearly 20 million actually looks like.  I honestly can not fathom the multitude of hearts that beat in that city.  I cannot even consider the stories that teem and scream above the soot and exhaust of the bustling kingdom; the kingdom of pain and commerce.  Their stories.  Their humanity.

The thing that I prayed against…the request I made was to avoid it! The opposite of that request was the exact thing that occurred.  I knew I’d break if…A beggar girl asked me for food or money.  Don’t say, “Oh we have that in my town!”  I’ve been asked for money in multiple countries, hundreds of cities, thousands of instances; she pierced my soul.  She was lying on the road next to the airport.  Once seen she followed me silently to my taxi.  As I walked she kept tapping my hand.  She kept gently letting me know she was there.  She pointed to her mouth…mumbling in a language I cannot speak.  She kept touching my shoulder.  I didn’t want to get in the taxi because then she wouldn’t exist any longer.  I couldn’t give her money, it’d just go to her owner.  I had no food.  I had a backpack full of clothing and a bible.  This isn’t just another homeless child. She’s not just a memory.  She breathes right now!  Probably…So I think to myself, “that’s nothing!”  I haven’t even seen the city.  So why does this little girl move me so badly?  I continued on through streets of thousands of prostitutes. Some girls were working and some merely existing under the pressure of  a large hand.

We walked through and into the homes of slum dwellers…and they were happy in their 6′ by 6′ home made by particle board and mud; millions live like this. Still, this little girl would not leave my mind. We traveled north and saw millions of men and women who are either dying to work or dying while working.  Children that are enslaved for the exchange of a meal or cents per day. Millions.

We sat and ate with beautiful Muslims.  They treated us like kin.  In this mosque the boys just made eye contact with me. They just wanted to look into my eyes and see if there was peace or something else.  They saw longing.  They saw me ready to cry. They accepted us street walkers, foreigners, odd looking and out of the faith…they welcomed us not knowing our intention.  But they had confidence in a human.  I cried out in my heart, “Why doesn’t MY TRIBE ACCEPT AND LOVE AS THESE ONES DO?”

Her hand keeps touching her mouth.  She’s hungry.  Even if she collects a dime, it’ll fall into the pocket of a man.  If she doesn’t…his hand will fly.

We passed a mother who had a baby with a large wound on it’s head.  The wound was a gash; it was bloody.  No effort to patch it or mend it could be seen.  The pain of this baby might be enough to convince a passerby to drop change into her held out burka skirting.  She most likely did the wounding herself.  Don’t worry, this sight is easy compared to the blind boy standing right next to her.  His eyes were melted out.

As I sat in a chair holding bottled water for my unpoisoned stomach, Santi told me a story of a boy.  The story is a common one amongst homeless children in Mumbai. Shortened for my sake…and yours.

They found a homeless boy who he had a severe infection.  They treated him until he could speak well enough to tell the story of his wound. When he was cognizant enough he talked about having been left by his family for lack of provisions.  He had joined a gang as most boys do.  They must join gangs to stay alive and not get raped or killed…but even when they join a gang very nasty things occur.

There are many gangs, and if you’re a larger boy you’ll be able to fend for yourself and get your way: food, respect, physical affection from the other boys.   If you’re smaller, you’ll most likely get “taken advantage of” by the bigger boys.   These boys sleep in the streets of a city where anyone could disappear.

So when they asked him where his wound was from he said this: He was such a small boy that molestation was not physically possible…so, they forced it with a stick.

This is the story of hundreds of thousands of children.

…and this happens to the boys..who are seen with value?!

Santi told me about the girls.  IF you are a girl in Mumbai and you’re homeless or without parental care in that city, you’ll disappear within hours, not days, not even 12 hours.

He said to think that a girl would not be found, raped and either murdered or thrown into a brothel within 10 hours would be hopeful naivety. “10 hours is too long,” he said.

I received a twitter update as I was passing through this slum of millions and it read something like: “I cannot function without great worship, I need to put on a CD since my own youth group can’t introduce me to God powerfully enough”.

He’ll answer.  But will I stay dead?  Or will I try and resurrect my selfishness?

I can’t honestly enjoy this laptop any longer.  I can’t enjoy my a/c or strong feet without being reminded of that body that lay in the middle of an overpopulated road.  I have people that love me sitting upstairs…and a phone call away.  Who knows the name of the body that lay without breath?  Anyone?  Who knows this child with half of its’ face gone so the owner of the fetus can make extra money?

Even in that black…they pray to gods and even some to my God. I saw a people that still love and believe in a god while bathing in a river with floating dead bodies in it.  Some bathe out of faithful requirement;  Some bathe because they do not have a home and the flies won’t get off their wounds.

What are we here for?