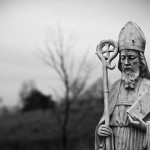 In 401 AD a young boy named Patrick was kidnapped from his home in Britain and sold as a slave to a king in the country of Ireland. Today, over 1600 years later we celebrate this man known as St. Patrick of Ireland.

Patrick was 16 years old when he was sold as a slave to Ireland. He remained in slavery for an isolated 6 years tending flock. What did Patrick do during those 6 years to keep his sanity and hope? He prayed. “I would pray constantly during the daylight hours. The love of God and the fear of Him surrounded me more and more- and faith grew and the Spirit was roused, so that in the one day I would say as many as a hundred prayers and after dark nearly as many again.” It was after six years of this that he heard a voice speak to him saying “Patrick, your hungers are rewarded: go home.”

25 years later, at the Age of 47 Patrick read a letter from from the Irish asking him to come back to Ireland, to serve the very people who enslaved him. It was at night, an Irish voice spoke out of the letter to Patrick crying “we beg you to come and walk among us one more.” From then on Patrick could not get the Irish out of his mind. Shortly after Patrick returned to Ireland, full of the Holy Spirit and in love with the Irish.

Patrick worried constantly for the people of Ireland. Not just for their spirit, but for their spiritual warfare. “The horror of slavery was never lost on him: ‘but it is the woman kept in slavery who suffer the most- and who keep their spirits up despite the menacing and terrorizing they must endure.” Patrick is beyond dispute the first hunan being in the history of the world to speak out unequivocally against slavery. His speaking out against it won victories for the Irish people as shortly after his death the Irish slave trade came to an end.

Today we celebrate a man who changed the world. A man who went back to the people who enslaved him out of his intense love for them, which can only come from Jesus. Today we celebrate a man who considered the lives of the Irish of greater value than his own. A man who gave up his life so that the Irish could have life. Today is a celebration, a celebration of courage, honor, humility and greatness. So, as you drink your Guinness, eat your cabbage and potato bread and listen to your favorite Irish band take a moment and remember Patrick of Ireland. Thanks God for people in the world who are like him today.

Whats your next step?

All quotes from How the Irish Saved Civilization.

I leave you with the Saint Patricks Breastplate

I arise today
Through a mighty strength, the invocation of the Trinity,
Through the belief in the threeness,
Through confession of the oneness
Of the Creator of Creation.

I arise today
Through the strength of the love of Cherubim,
In obedience of angels,
In the service of archangels,
In hope of resurrection to meet with reward,
In prayers of patriarchs,
In predictions of prophets,
In preaching of apostles,
In faith of confessors,
In innocence of holy virgins,
In deeds of righteous men.

I arise today
Through the strength of heaven:
Light of sun,
Radiance of moon,
Splendor of fire,
Speed of lightning,
Swiftness of wind,
Depth of sea,
Stability of earth,
Firmness of rock.

I summon today all these powers between me and those evils,
Against every cruel merciless power that may oppose my body and soul,
Against incantations of false prophets,
Against black laws of pagandom
Against false laws of heretics,
Against craft of idolatry,
Against spells of witches and smiths and wizards,
Against every knowledge that corrupts man’s body and soul.

Christ to shield me today
Against poison, against burning,
Against drowning, against wounding,
So that there may come to me abundance of reward.

I arise today
Through a mighty strength, the invocation of the Trinity,
Through belief in the threeness,
Through confession of the oneness,
Of the Creator of Creation.