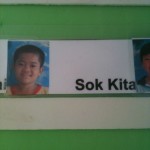 I was only at the orphanage for a few minutes on the first day when I met Kita. Kita, who I have written about previously, was this cute 6 year old with a bob cut and an attitude that could rival anyones. I remember her coming over and sitting beside me as the team lead songs and crafts. She showed me where she sleeps, where she plays and where she eats. She didn’t know english and I still don’t know Khmer. There was something really cool about our connection, well that is until she caught me talking to one of the other kids in the orphanage.

Whenever Kita saw me talking to one of the other kids in the orphanage she would clearly and unashamedly show me how upset she was. She would pout, get angry and make sure that I saw it all. Then, since I am the empathetic type I would find my way back to Kita and throw her in the air and catch her again until she felt better. This happened over and over for the entire 3 days.

I am not sure if Kita brought healing to me, or if I brought healing to Kita, but either way it was an incredible 3 days of getting to know this little girl who was most likely going to die of AIDS at a very young age. When we left the orphanage it was heartbreaking, not just for me but for the whole team and the children we had been spending time with. I remember Kita didn’t even say goodbye, she just sat there sad and watched us go. I held on to the memory of Kita for many years after that, and last year (3 years later) when we went back to the orphanage I prayed that I would be able to see her again.

We were at the orphanage for an hour or so when I asked the director if Kita was there. She took me to a wall and pointed out a picture of a girl and asked me if this was who I was talking about. I said yes and she in turn told me that she was at the hospital sick, due to her having AIDS. I was so glad to hear that she was still there, but broken to hear that she was sick and that I may never get to see her. I wondered what I could do for this little girl to show her that she is not forgotten. I asked the director if I could write Kita a letter to let her know that I had come back to see her and that she was not forgotten. So, that is what I did.

I have this picture of Kita in my head. In it she is reading the her  letter from me and smiling that she was remembered. I pray that it gave her some fight and a reason to not give up. I also pray that I get to see Kita this summer when we go back to Cambodia and the House of Rainbow Bridge. Pray about coming with us. Pray about seeing Jesus change your life as you serve him in Cambodia for 10 days. I would love you to join me this summer and I know that Kita would love to meet you.

See more on the trip, as well as register here.