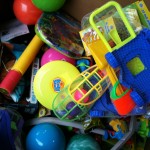 The other day I showed up at a friends office building to gather toys for the poor in Mexico. Someone had donated a bunch of toys and four different organizations were called to come over and grab them to distribute. When I got up to the room I was excited and a little bit overwhelmed at the amount of toys that I was about to go through. I was the first to get there, so after I boxed up a 1/4 of the toys I went down to my car to leave and then I saw it.

Across the street  there was a semi truck just parked and waiting. We all assumed that it was one of the non-profits waiting to pick up toys, but then we realized that it was another toy drop off. It was at this point that I wished I was no longer there. You see, I knew that it was going to take forever to empty that truck, and when it was empty we were going to have to find places to give the toys to. In addition to that, it was raining.

Turns out there was 5000lbs of  toys, approx. 25 pallets full. The other thing was that we couldn’t go down to the warehouse to distribute them, so they had to fork lift the toys to the second floor where we emptied each box and sorted the toys by age group. While we were doing that we were scrambling to find organizations that could take the toys. To be honest, it was a bit annoying. I kept saying to myself “this is crazy, there are to many toys here. Didn’t the lady who donated them think it through? Im gonna have to do way more work than I thought, plus now I have to find places to take these toy’s so that kids who don’t have any can get some.” I am not sure at what point I caught my self, but at some point I realized that I was complaining about ‘doing justice.’

You see, doing justice is hard work. If it were not hard work then everyone would be doing it. In this situation, sorting gifts for the poor we had to make lots of phone calls, we missed lunch, we made bunches of trips up and down the stairs and we thought it was never going to end. Maybe this is why it is mentioned so much in the Bible, cause Jesus didn’t want us to give up on doing justice, he wanted to drive it into our heads and hearts so we wouldn’t quit, even when it got hard.

How are you doing justice? Especially during the Christmas season when it is so easy to focus on our own lives and the lives of those around us. My encouragement to you is to look for people who are less fortunate than you, find out their needs and ‘do justice’ on their behalf.