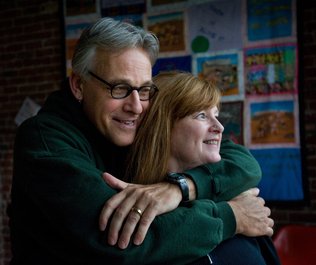 Everything seemed eerily normal. Cambodian pastors from 13 different provinces assured Pastor Don Brewster everything was fine when he visited the country in 2005. Other than poverty, there didn’t seem to be any major problems in Cambodia.

Within two days of returning to the States, Don and his wife, Bridget, learned the horrible truth when Dateline NBC aired their first of many specials on an unthinkable reality: the trafficking of children for sex in Cambodia.

“The very children I held hands with and saw running in the streets were not just trying to survive poverty. Many were living in hell, enduring torture,” says Don. “I couldn’t believe it was right under my nose and I didn’t even know it.”

Far from hidden, the community of Svay Pak, in particular, is a notorious haven for international pedophiles where girls as young as 8 brazenly wave foreigners toward brothels and karaoke bars to purchase sex. These children were trafficked from Vietnam, kidnapped from rural communities, sold by impoverished family members or exploited by members of their community. Once a girl is controlled by a pimp or brothel owner, she is forced to sell herself up to 12 times a night.

UNICEF reports that across the world, there are over one million children entering the sex trade every year and that approximately 30 million children have lost their childhood through sexual exploitation over the past 30 years.(1) Hundreds of thousands of these children are in Cambodia, enduring what Gary Haugen of International Justice Mission (IJM) calls, “the ugliest, most preventable man-made disaster on the globe today.”

When facing the truth of this disaster in Cambodia, Bridget explains, “Our hearts broke realizing the largeness of the problem and we wanted to offer our help any way we could.” It was time to act. After selling their home, quitting their jobs, conducting weeks of research and building a team, Don and Bridget moved to Cambodia and developed Agape International Missions (AIM).

Their first goal was to meet the greatest need they had seen; quality aftercare for rescued girls. “We learned that undercover operations that rescued girls and shut down brothels were no longer effective because there was nowhere for a rescued girl to go. She ended up in a cycle of hopelessness that put her right back in a brothel.”

AIM Restoration Home (ARH) opened in 2006 as a beautiful, safe haven for rescued girls to get the holistic rehabilitation they need to live full, healed lives. After just a year, they had 52 rescued girls on the road to recovery.

“One of our girls who had been through unthinkable things was healing so beautifully. She no longer believed she was worthless but knew she had value and a life ahead of her. I went to her home city, Svay Pak, and was walking around looking for a job and home for her reintegration, when a pimp who I recognized from undercover footage said he had hundreds of girls available and asked if I wanted to buy one,” recounts Don. “It was incredible. This was her neighborhood, where selling the innocence of children was acceptable. How on earth was I supposed to just throw my daughter back into that?”

Believing the best way to prevent trafficking to be protection from the community, Don and Bridget founded Rahab’s House, a Community Center in Svay Pak, in 2008. Here, the community receives healthcare, education, necessary items and a safe place for children to spend time. Most importantly, they build relationships with Christian Cambodians who teach the value of their children and how to protect them.

The results were unprecedented. “The transformation evident on those streets today is simply extraordinary,” says IJM’s president, Gary Haugen. “Rather than being peddled for rape, children are now accessing educational opportunities, health services and community building activities, from art to break dance, provided by Agape International Missions within the community. Their steadfast commitment to Svay Pak and its children has created a vibrant sense of hope, and brought life to a very dark place.”

Now with the goal to Fight Trafficking, Restore Victims and Transform Communities, AIM has expanded to multiple Rahab’s House community centers, a Lord’s Gym reaching pimps and traffickers, AIM Employment Center (AEC) giving young women a career in textiles, and a network of Cambodian Churches who are now educated about the issue they didn’t even see back in 2005. AIM equips churches to fight trafficking in Cambodia and now in the US with AIM Anti-Trafficking Training.

“Our goal is to defeat child sex trafficking. We will fight until we’re victorious,” says Don. “We need as many soldiers as we can get.”