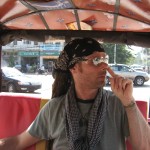 Greeting everybody, my name is Wade Pallister. Phil and I have been friends for a very long time, we’ve done lots of stuff together in YWAM over the years. Currently I am helping out with a bunch of Steps of Justice stuff.

Today Phil asked me if I could post about Cambodia. I have been Phil’s wingman on two previous Cambodia trips and I am the guy who makes sure that he doesn’t get lost or do anything too stupid. My first trip to Cambodia was like no other missions trip I had ever been on, which is saying a lot because I have been on staff with YWAM for 20 years and have travelled to  20 countries around the world doing all sorts of different outreaches.

As you should know by now from reading this blog, Cambodia suffered Pol Pot’s brutal dictatorship from 1976 – 1979. In those 3 short years, his Khmer Rouge government executed 1.7 – 2 million of their own people. When in power, Pol Pot forced all urban dwellers to relocate to the countryside to work in collective farms and forced labor projects, toward a goal of “restarting civilization” in a “Year Zero“. The combined effects of forced labour, malnutrition, poor medical care and executions resulted in the deaths of approximately 21% of the Cambodian population. Dissenters, opponents, co-workers, friends, family, brothers, sisters, parents, children… no one was above suspicion of being “an enemy of the people.” The fortunate ones were enslaved into forced labour in the agricultural fields. The unfortunate ones were brutally tortured and killed. 2 million Cambodians killed by their own government in only 3 years. On average 1826 people were killed per day, or 1 person killed every minute, of every day, for three years, by their own countrymen and government. The far reaching effects of this brutality can still be seen in Cambodia today, 32 years later.

Cambodia is still recovering. The local and national infrastructure is shot. People living in extreme poverty are everywhere. Government corruption is rampant. The number one cause of death for children under the age of 5 is not AIDS, or malaria, but diarrhea, a simple and completely treatable disease. But the most shocking this is that there are very few old people… because most of them where killed by Pol Pot. But Cambodia is also a very beautiful, lush country filled with hope and promise. 50% of the population is under the age of 15 and are looking toward the future. Everywhere you look there is life, colour, excitement, children playing, people going to work and doing the best they can to raise their families. It is a fascinating place of dichotomies and extremes.

I challenge you to join us in Cambodia this summer. Come and see it for yourself. It will be exciting, fun, adventurous, heartbreaking, sad, and brutal all at the same time. You will find out that if we are going to do effective justice for Cambodia it will take much more that just one 10 day trip this summer. It is going to take people willing to come with us, find out what is really going on in Cambodia and then go home and go to school to become nurses, doctors, politicians, lawyers, policemen and women, entrepreneurs, and teachers and then return to Cambodia for the rest of their lives to practically do justice in all spheres of society and live out the Gospel for the amazing nation of Cambodia. The real outreach starts when we get back home.