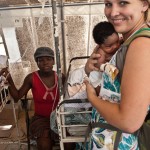 Last week a group of us went to the General Hospital in Port Au Prince. The group I was with went to a room where people were waiting to have surgery. We went around to each person and asked what they were getting operated on and then prayed for each need. There were a bunch of stomach issues, but nothing out of the ordinary. I remember seing this one lady weeping on her bed. We went over to her and asked how we can pray. She told us that she is all alone and is afraid of the surgery. It was heartbreaking. Here was this lady in her late 30’s or early 40’s alone and scared in a broken hospital in Haiti. What could we do? All that we could do was to pray. So, we laid hands on here and prayed for comfort and peace. She calmed down as we prayed, but it was still a heart wrenching thing to be apart of.

We were about to leave the hospital when I askd the team if there was anything else they wanted or felt needed to happen before they went back to the bus. One girl said that she had prayed before coming to the hospital and felt that we were supposed to pray for a baby wearing red and something about a bird. Another girl said that she felt the same thing, but the bird was Tweetie bird from Loonie Toons. So, off we went in search of this little baby whom we believe God spoke about.

We walked around for a bit and ended up under a big tent where all the kids were. I saw a little girl playing with a Dora doll that Abby, my 4 year old had sent with me. S0 I broke away from the team to go hang with her. The rest of the team bailed and walked to another section of the hospital. They walked by a room and someone felt that they were to go in. When they walked in they saw this little baby laying beside her mom. The mom was wearing red and they felt that she was the baby that Jesus had shown them. Unfortunately there was no bird, but they approached her anyway.

As they were praying my friend Lindsay stepped back to take a picture and under the bed she saw a blanked with a giant picture of Tweetie bird on it. She almost crapped, well not really, but she was surprised. There the team stood praying for a little girl, but not just any little girl. They prayed for the little girl that Jesus directed them to.